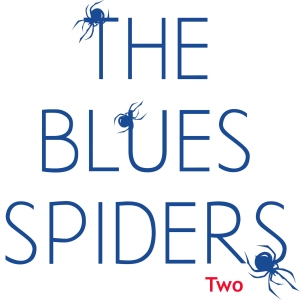 At a Red Butler gig at the New Crawdaddy Club, Essex, recently (see my review #66), I ran into Russ Cottee of The Blues Spiders. He told me that the band would soon be recording their second album, and would I be interested in reviewing it when ready? Oh yes! So recently he sent me a pre-release download of the album; and the other day at Peggy Sue’s Music Bar (see my previous article #87), he gave me the CD version too. So here is my review…

The Essex-based Blues Spiders consist of Russ Cottee himself on guitar; Mitch ‘Harp Hog’ Greaves (Harp/Vocals); Paul Henshaw (Bass); and Bob Clouter (Drums). They describe themselves as a “Thames Delta Blues / R’n’B band (Real R’n’B, not the American plastic version)”. I think that’s fair comment! They are one of several good R’n’B bands currently making a name for themselves around the Home Counties. Influenced as you’d expect by local heroes like the Feelgoods / Wilko; and by classic Blues names such as Little Walter; Howlin’ Wolf; Chuck Berry “…and all the usual suspects”! My guess is that you’ve already decided if you’re going to like them or not! I certainly like ’em!

Two is a very good album. It never ceases to amaze me that there are still bands coming up with fresh ideas within the Blues / R’n’B genre. The Blues Spiders have achieved a good blend of the traditional with the innovative in this collection – and thus keeping the Blues alive and well. On the one hand its pretty much tried and tested stuff (and that’s not a criticism!); yet on the other hand, it has a few surprises up its sleeve.

There are eleven tracks on the album – mostly penned by Mr.Cottee; and some by Mr.Greaves. There is one cover (Elmore’s bottle-neck classic, ‘Shake Your Moneymaker’). Six are studio recordings; and five were recorded live at The Boom Boom Club, Surrey last August; and these give a good idea of the quality of the band’s on-stage performance.  They’re all good lively numbers anyway.

The musicianship is good too. There is some fine guitar from Cottee – including some tasty slide-work on ‘Devil In A Bottle’ which reminded me a bit of Johnny Winter, and a little of Micky Moody; and some great BB King-esque lead guitar on ‘You Don’t Get The Blues’.  Greaves’ vocals are very good, and well-suited to the style of the music; and his harp-work is excellent – especially on ‘Party Girl’; and ‘Great Expectations’ where he works well with Cottee’s guitar (which is also really good on this one). At all times the rhythm section of Henshaw and Clouter is tight, steady and reliable; driving the songs on both in the studio and the live recordings.

Another thing I like about this collection is the lyrics, which are more interesting than in yer average Blues song – particularly on ‘European Blues’ and ‘Me And Jimmy Reed’. The live section (tracks 7 – 11) truly captures the band’s ability to perform at gigs. I’ve said before that Blues is a form of music best heard and seen live. Capturing a good on-stage performance is not always easy, but The Blues Spiders have created a fine show-case for their live act with this album.

The CD version comes in a simple slip-case with a good basic logo design, and quite a lot of useful info on the back. No room for printed lyrics unfortunately, which is a shame because, as I said, these are good. Its available on iTunes now; or on CD at gigs for only a fiver. Its a recommendation from me if you like (as the band say) “real” R’n’B!  PTMQ.