Recently, Garry Walker of RFC told me he had booked Yael Bebb for a feature session at the club, and recommended that I come along. I was intrigued as I knew nothing about the lady or her music. He had met and seen her play at Rochester and Dartford earlier this year, and was impressed enough to invite her to the club. I met and had a chat with Yael before the evening’s proceedings began. She has apparently recently moved from Kent to Essex, and plays a lot around her new county home; and is involved in the Dengie Folk Music Sessions around the East Essex area. She also performed (and went down well by all accounts) at the Leigh Folk Festival this summer. She had arrived with a group of friends (some of whom would join her shortly for part of her set); but let’s leave them sitting at their table for a while….

As is usual with these feature sessions at RFC, the night begins with an Open Floor spot where anyone who so desires can perform a couple of songs. And as usual, a wide range of styles and abilities is represented; all admirable in their way. Master of Ceremonies for the night was Smolowik who got the ball rolling with a couple of good songs. Notable among those present were club boss Garry who sang two fine trad songs; Rod Standen who has recently released an album called Poetic Force. (See my review #109); singer Jo Gregory who sang a beautiful rendition of ‘She Moved Through The Fair’ and will perform a feature set at RFC next February; a gentleman called Keith who played an oud (a remarkable instrument of Middle-Eastern origin related to the lute); and a lady called Jan who recited an impressive Shakespearean sonnet that she’d written. I played David Coverdale’s ‘Soldier Of Fortune’ and my own song ‘The Boys Of The Old 83rd’… but I offer no critique of my own performance! 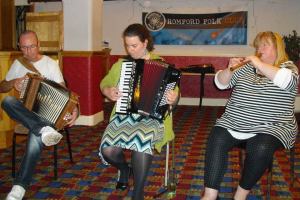 After a short break it was time for this week’s feature spot. Accordion in hand, Yael seated herself in the performance area and began her short but eclectic, and internationally flavoured set, which included French, Scottish, and English tunes; and the African-American Spiritual ‘Wade In The Water’, for which the audience joined in. I particularly enjoyed her version of Fairport’s ‘Crazy Man Michael’. At one point Yael invited two friends to join her – regulars from the Dengie Sessions. These were Janice Higgins on recorder; and Ken Saunders on accordion. They played well together as a unit and are obviously well-practiced. A thing that I like when seeing musicians play live is a little explanation before each song; and Yael did not disappoint in this. I quite enjoyed her set, and so did everyone present – as evidenced by a demand for encore. I’d recommend seeing her and her friends if you are into Folk music and live in the Essex area. Thanks to Garry of RFC. PTMQ.