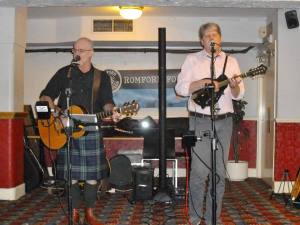 At a gig recently, Paul Ballantyne told me he was booked, along with Daniel Nestlerode, to play at RFC (See my review # 146). Having seen Paul play on occasions (See review #59); and having been told by several people that Daniel was ‘well worth seeing’, I promised to go along.

As is usual at RFC, the guest’s set was split into two parts – both preceded by Open Floor spots. These were varied as usual. I thought Mikanora were again pick of the bunch with their funny and topical ‘Old People’ which is a song about the NHS – or rather the government’s attitude towards it!

Daniel and Paul’s set was basically a live performance of the tracks from Daniel’s album More Than A Little Guitar (a copy of which he gave me afterwards). Some of these Country/Folk songs are Traditional, and some penned by Daniel himself. Although Paul is not on the album, he works very well with Daniel and together they produced a fine live show, with Paul on guitars, and Daniel on mandos/vocals. Songs such as ‘Old Calapina’ and ‘Long Black Veil’ I thought were particularly good. Surprisingly they finished up with a cover of Pink Floyd’s ‘Wish You Were Here’, to which we all sang along. An enjoyable set.

Daniel is currently recording a new album and I look forward to hearing it. Thanks to the guests, the RFC, and all who took part. PTMQ