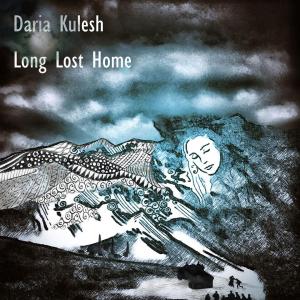 Its always nice receive new music from my friend Russian singer/song-writer Daria Kulesh – whether it be as part of the Folk Band Kara, of which she is a member, or in this case more of her remarkable solo work. I’d heard some of the new songs, as they have been part of her solo set for a while now (see my review #45), but I was keen to hear them all in their perfected studio-recorded form.

And so I gladly received Long Lost Home recently for review. I had been wondering how Daria could possibly follow up her marvellous debut album Eternal Child (see my review #35) with her second album; but whereas the debut was about her personal life-experiences, this new work is about the plight of her ancestors. It is essentially a twelve track self-penned concept album (I’ve always been partial to concept albums) – the theme in this case being songs inspired by stories from Daria’s ancestry in Ingushetia (a mountainous region in the south of Russia).

Every one of these beautiful songs has been lovingly teased from Daria’s very soul – and even from the very spirit of her forebears. Every one has a heart-felt story to tell; or a wrong to right. And they are delivered with a passion that only Daria can summon up. They are stories of family and local heroes – and enemies (Stalin comes in for some well-deserved derision). And I have learned a lot from them – musically and historically.

From the haunting opening song ‘Tamara’, we are transported to an exotic place – both geographically, musically and lyrically. The effect of this is quite intoxicating and intriguing, I found. All the songs in this collection are exceptional. I very much liked ‘Safely Wed’ and ‘The Hazel Tree’; but the song I particularly warmed to was ‘The Panther’. This is the true story of local heroine Tangieva, who defied Stalin for the sake of her people. Daria impressively tells of ‘The Panther’ in this song; haughtily singing ‘An Amazon doesn’t serve in an army of slaves’!

The CD comes in a card tri-fold sleeve, with disc fitted one side and lyric booklet on the other – all very well designed and presented, with striking photos of Daria’s ancestral homeland. The booklet has lyrics and of course (typically thoughtful of Daria), plenty of very useful background information on each of the tracks so that the listener can reap as much as possible from the songs.

The album will be officially launched on 23rd February 2017 at Cecil Sharp House, Camden, London, where Daria will be accompanied by several other fine musicians such as Jonny Dyer, and members of Kara too – who have contributed so well to the album. It will of course be available to buy at the gig, or from Daria’s website. PTMQ