Book review.  When Steve ‘Loopy’ Newhouse told me he was writing a book about his time as a roadie for Heavy Metal maestros, Iron Maiden; I was very keen to have a read. So he sent me a pre-publication PDF of his work, Loopyworld: The Iron Maiden Years, from which I could write a review. I was keen because I was a big fan of Maiden long before they had achieved their international mega success; and I saw them innumerable times – mostly at The Ruskin Arms PH in East London, throughout 1979.

I know Loopy; so when I read the book, I could hear him narrating it in my head. It is written really well and flows easily, like a mate telling you a long but fascinating series of anecdotes down the pub! Its an easy read. He writes just as he speaks – in a relaxed London / Cockney accent. Fine for me because I’m of the same stock; but English speakers outside the UK may have a bit of a problem with some of the colloquialisms contained in it. At the end of the day though, its a book about a Rock band from the East End of London, so what could be a more appropriate lingo to use?

The book sets out Loopy’s time with Iron Maiden from September ’78 to July ’84 – with a break of two years in the middle when he got sacked, then later reinstated. The band were of course one of the leading lights of the New Wave Of British Heavy Metal (NWOBHM); a serious back-lash against the New Wave/Punk aberration of the mid-70s. By using his old diaries, Loopy describes the highs and lows of his career as a roadie/drum tech for Maiden (and other bands). It is not just a memoir, but a valuable history of Maiden in their earliest years; and an eye-opener for life on the road. He is refreshingly honest, and undoubtedly accurate; and has brought to light many anecdotes and observations about Maiden – and the Rock scene in general – that may have otherwise been long forgotten. It is a fascinating read. 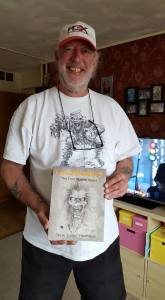 Loopy with his magnum opus!(Photo: Loopy)

The book comes as a paperback of 200+ pages. It has a very clear format and typesetting. It contains some great photos, although unfortunately without captions which I think would have been very useful (but that’s the only, minor, complaint that I’ve already mentioned to Loopy). The flyers, ads and posters shown from the time are interesting too; as they mention other artists that I’d seen and forgotten (For example: Zaine Griff, who I saw at Reading ’79; and Lea Hart, supporting Judas Priest at Hammersmith in October ’78).

The cover illustration is by none other than Derek Riggs – the man responsible for bringing ‘Eddie’ to life on numerous Maiden album covers. Loopy also tells me that there is a secret code contained in the book – but I’ve yet to suss it out! The book is out now and is available from Loopy’s website. If you’re a Maiden / NWOBHM fan; or you were a London gig-goer in the late ’70s; it is definitely a must have. Put it on your Christmas stocking list! Highly recommended. PTMQ

Loopy kindly signed the book for me. (Photo: PTMQ)

My own memories of Iron Maiden.  Reading Loopy’s book initiated a trip down Memory Lane for me. I found the earlier chapters particularly interesting because Loopy mentions many of my old haunts: The Ruskin Arms, East Ham of course (which is now an hotel); The Rabbits, Manor Park (now a chemist); The Green Gate, Newbury Park (now a MacDonalds); The Green Man, Leytonstone (now an Irish theme bar); and The Red Lion, Leytonstone (still a pub!). All good Rock venues of the time. He even talks about Bonzers Farm, where I used to go to pick up bags of spuds for my Mum – precariously strapping them on the pillion seat of my motor bike!

Apart from the dozens of times I saw Maiden at the Ruskins, I also saw them in other places that Loopy mentions: I was at Neal Kay’s Bandwagon HM Soundhouse, a Rock club in Kingsbury, North London a couple of times; at the Reading Rock Festival (August 1980); the long gone Rainbow Theatre, Finsbury Park where Maiden played as part of that venue’s anniversary celebrations (With Praying Mantis support, June ’80); at The Music Machine, Camden Town (also August ’79; supported by Angel Witch and Toad The Wet Sprocket); their famous charity gig at the Ruskins (April ’80) – which is the only time I remember having to buy a ticket in advance for the venue (and boy it was packed that night!); and their gig at Hammersmith Odeon supporting Judas Priest (March ’80).

But it was the Ruskin Arms that will be forever synonymous with Maiden. I first saw them in April ’79, and I must have been present at almost every gig they played there throughout the rest of that year. A couple of mates and I would always be seen doing the ‘Transylvania Boogie’ (as we called it) at the front of the low stage. Occasionally we’d help shift the band’s gear too. I seem to remember they played three consecutive nights there at Easter, and I went to all three. Before and after these gigs, we would have a chat to the band and got to know them quite well – especially Steve Harris; Dave Murray and Paul Di’Anno I also remember being pulled up and searched by the Old Bill on the way home from a Maiden gig at the Ruskins – I remember because it was my birthday in January ’80! But the last time I spoke to any of them was at a Radio Caroline Roadshow in April ’80 when I bumped into singer Paul (I mentioned this in an earlier article #41).

There was one particularly good gig at the Ruskins, when the band (and I think I’m right in saying this, not having kept a diary like Loopy!) debuted ‘Running Free’, and it went down a storm. Then it was ‘Remember Tomorrow’s debut, and after rapturous applause, I recall Steve Harris saying from the stage with a big grin on his face, that he didn’t know how the crowd would like it – he needn’t have worried; because for my mates and I it was the best thing we’d heard Maiden do! It may have been at this same gig that the band played a blinding cover of Van Halen‘s ‘Ain’t Talkin’ ‘Bout Love’ as a second encore.

I’d say I’m not so much a Maiden fan these days, although I have a great deal of respect and affection for them, and always keep an eye on what they’re up to. They are certainly responsible for providing me with a great deal of good memories, and I met lots of interesting people at their gigs. Back in ’79 I always said they’d hit the big time. It was obvious right from the start – although I don’t think anyone (even the band themselves) were prepared for just how far and how quickly their career took off. Long may they continue! Cheers Loopy! PTMQ