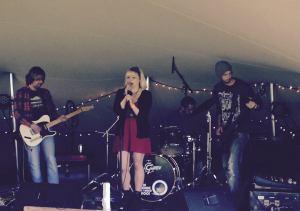 Michelle Diling, vocalist with Devon-based Indi-Noir Rockers Vivid Vague, contacted me some time ago, and I’ve been keeping an eye on the band’s progress for a while. They’ve been developing nicely of late; and have recently released two excellent singles to add to their repertoire: ‘Weep’ and ‘Breathe’.

The band consist of Michelle herself (vocals); Nathan Gregory (guitar); Adam Nickels (bass); and Simon Hodgkiss (drums). Michelle is the main lyric writer; whilst the boys handle the music. They’ve been together for a little over a year, and have only been gigging for a few months, but they’re already getting noticed – travelling further afield than their Devon home-base, and have recently appeared at London’s high profile venue Dublin Castle, Camden. They’ll also be appearing at Exeter Respect International Festival soon. (See link below),

The band’s influences are diverse; and include various Indi / Grunge bands; such as Muse and Royal Blood. There is something new going on with this band though, and it will be interesting to see how they find their own niche.   Michelle’s vocal influences too are varied; and include many female luminaries from Siouxsie to Winehouse – I’ve also heard her sing a blinding (and rather Bluesy) unaccompanied cover of Lana Del Rey’s ‘Video Games’ (in her pre-Vivid Vague days). Yet she is no copy-cat, and has developed her own unique vocal style which is still evolving.

I’ve not been able to see the band live yet – although Michelle has kindly invited me to gigs a couple of times – but I’ve seen live footage, and they seem to be musically tight, and have a good stage presence – with Michelle of course being the main focus of attention. It looks like the band have been putting in some good hard work right from the start, and its starting to pay off for them already.

The two new singles, ‘Weep’ and ‘Breathe’, are the latest in a line of steadily improving songs, with accompanying videos – get on to You Tube and you’ll see what they are all about. I think they are a band that have a lot of potential, and it will be interesting to see where they are heading. PTMQ

Both singles are available on iTunes …

There are now several Vivid Vague videos on You Tube. Here is a link to the ‘Weep’ video ….