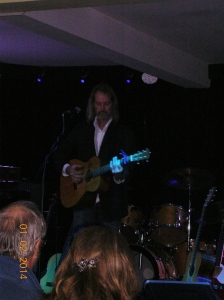 I’d ordered tickets for this gig well in advance; and at only £13 a shot you can’t go wrong! Cousin Charlie and I turned up at 8PM and were directed to our seats at table 7 – the music room being arranged with tables like a trendy jazz café – all very civilised, and I must say I approved! Last time I saw a gig here last December (for BUDDY WHITTINGTON) the seats were unusually arranged in rows with standing room behind. But the ‘jazz cafe’ style of seating arrangement is normal for this club. I like the Touchline; its a small friendly place and gets some good acts booked – some fairly famous names, and a few copy-cat/tribute bands too.

The show opened with Master of Ceremonies Brian Sangwin introducing the support act, ADRIAN NATION. I’d heard this name before and was keen to see what he was all about; knowing nothing of his music. We’d clocked him sitting near his own merch table at the back of the music room as we walked in; he on one chair, guitar on another. It was nearly nine before this singer/song-writer, suitably folk-bearded, took to the stage; and it was immediately evident that he knew his way around an acoustic guitar. He impressed the audience with a display of fretboard skills; constantly changing guitars and tunings to suit his repertoire. He wasn’t fazed when white noise sounding like a dentist’s drill introduced itself in the middle of one song. (This was later bizarrely found to be a fault on the hand dryer in the gents WC; and as Brian Sangwin pointed out later, proves that men do wash their hands!)

NATION’s music is not easily definable, although obviously sitting generally under folk music’s wide umbrella. I particularly liked his piece inspired by the book ‘Up the Yukon Without a Paddle’; and his only cover of the set, a very good version of RICHARD THOMPSON’s ‘1952 Vincent Black Lightning’. At times he reminded me of GORDON GILTRAP – especially in his use of open tunings. He says he has an ambition to play the ROYAL ALBERT HALL – well, he has the confidence, the voice, the guitar skills, and the songs to do so; so why not one day?

THE STRAWBS (Photo by PTMQ)

Now to the main event. Most people of a certain age if asked to name a Strawbs song will undoubtedly say ‘Part of the Union’ – that classic hit single of theirs from 1973. This however, is like JEFF BECK only being remembered for ‘Hi Ho Silver Lining’, or (as my good friend ROB WHEATON of folk band DEVONBIRD often likes to point out) JONI MITCHELL for ‘Big Yellow Taxi’. In all these cases these highly memorable songs are in no way typical of the bulk of the work by these artists. Anyone expecting The Strawberry Hill Boys (as they were originally known) to perform anything like ‘Part of the Union’ would have been sorely disappointed though, as this veteran band played what they are best known to their long-term fans for: high quality progressive rock (sometimes with a folky feel). Furthermore, its prog-rock originating from the golden age of British prog-rock – the early 70s.

The band currently consists of: ageing long-term members, DAVE COUSINS (vocals and guitar); DAVE LAMBERT (lead guitar); CHAS CRONK (bass and 12-string); and TONY FERNANDEZ (drums); now joined by ADAM WAKEMAN (keyboards). The latter replacing his brother OLIVER WAKEMAN who left recently to join SNAKECHARMER; and both of course sons of the legendary keyboard maestro RICK WAKEMAN, who famously tickled the ivories for the Strawbs until departing in 1971 to join YES. I wonder if any other band can boast of having a father and two sons all playing keyboards for them at different times?

The band opened with ‘Turn Me Round’ and continued to play several old songs with barely a word from COUSINS until he announced they would then play the “Hero And Heroine” album in its entirety. And a near faultless rendition it was too; apart from at one point COUSINS began playing with his capo on the wrong fret (easily done!) and had to start the song over again. All in all though, it was a damn fine performance. I was a little disappointed that they didn’t do ‘The Man Who Called Himself Jesus’; but very glad they played ‘Down By The Sea’ with its haunting arpeggio. With the main set finished it was only necessary to clap, cheer and whistle loudly to get the lads back on stage for an encore. This final offering was of course the iconic electro-folk hit single from 1972: ‘Lay Down’, which had everyone singing along. ‘Part of the Union’ would have gone down well at this point as a finale, but it was nonetheless of a performance without it.

With COUSINS’ distinctive voice and flamboyant arm-waving front-man style; LAMBERT’s confident lead guitar; CRONK’s reliable bass playing; FERNANDEZ’s steady drumming; and WAKEMAN’s skilful keyboard work, THE STRAWBS can’t fail to impress; even after all these years. We found it a very enjoyable gig; and I’d recommend anyone with a liking for prog-rock to see them whenever possible. The only downside was that I couldn’t drink because I was driving – shame, because a few pints of London Pride would have gone down nicely! Cheers, Phil The Music Quill